Pacaso announces its Industry Advisory Board

Pacaso announces its Industry Advisory Board

Pacaso wouldn’t exist without fantastic partners in the real estate industry. Since our very early days in stealth mode, we have worked with some of the best local agents and have received advice from seasoned real estate professionals. They’ve been the fuel for our early success, and our agent partners have helped make the process of buying a Pacaso seamless and delightful for our homeowners.

It’s important for us to continue to learn from others in real estate, so today we are pleased to announce our new Industry Advisory Board. We’re thrilled to have a group of elite leaders with a wealth of expertise whom we’ll meet with regularly and call on for advice as we create a new category of second home ownership.

Thanks to all our members for joining. We can’t wait to work with you. 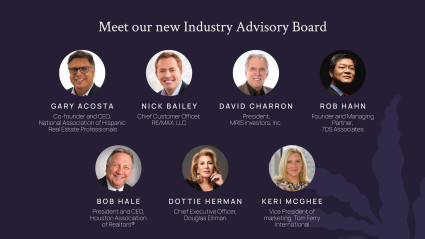 More about our advisory board members

Gary Acosta: Gary Acosta is co-founder and CEO of the National Association of Hispanic Real Estate Professionals. NAHREP is the largest Latino business organization in the nation. In 2018, Gary co-founded L’ATTITUDE, a mega-event co-owned by Acosta, Sol Trujillo and music superstar Emilio Estefan that celebrates the key role of Latinos in business, entertainment and politics. He is a general partner of the L’ATTITUDE Venture Fund, one of the nation’s leading venture capital funds focused on Latino entrepreneurs. Gary is also a partner in and the vice-chairman of The Mortgage Collaborative, a cooperative company of more than 200 banks and mortgage lenders. He was named by REALTOR® Magazine as one of the 25 most influential people in real estate, and Hispanic Business Magazine named him one of the 100 Most Influential Hispanics in America.

Nick Bailey: Nick Bailey is chief customer officer at RE/MAX, LLC. Nick oversees all support services provided by RE/MAX, LLC to its expansive network of franchisees and affiliates, with an unwavering focus on the relationship HQ has with broker/owners. Nick’s experience includes being a senior vice president of Market Leader, a vice president at Trulia/Zillow and, most recently, the president and CEO of Century 21. Originally from Wyoming, Nick bought his first investment property as a teen and earned his real estate license at age 21. He is a certified real estate brokerage manager, an accredited buyer representative and certified distressed property expert. Nick holds a Bachelor of Science degree in Business Administration from Montana State University and is a past recipient of the Entrepreneur of the Year Award from the Powell Valley Chamber of Commerce.

David Charron: For most of his career, David Charron has served the real estate industry in a variety of senior positions. David was CEO of MRIS, Inc. for 18 years, one of the largest MLSs in the country. Most recently he served as the chief strategy officer for the successor organization, Bright MLS, Inc. David has been consistently recognized by Inman (Top 100), Swanepoel (Top 200 and received its Industry Visionary Award in 2018), and RIS Media (Hall of Fame 2019) as one of the leading voices impacting residential real estate. In 2020, David was inducted into the CMLS Hall of Fame. David is currently president of MRIS Investors, Inc. He continues to contribute to the real estate industry via speaking, writing and whispering to people and companies that are intent on ensuring its continued vitality.

Rob Hahn: Rob Hahn is founder and managing partner of 7DS Associates, a strategy consulting firm specializing in creative solutions rooted in strategic analysis and data. With a varied background in finance, corporate law, technology, product development, media and entertainment, startups, fashion and even as a professional card player, Rob brings a unique perspective to business problems. Rob started in real estate at a specialized commercial real estate investment firm investing in airplane hangars (true story!). He moved on to Realogy, where he headed the interactive marketing for Coldwell Banker Commercial. Rob writes the well-known blog Notorious R.O.B., where he opines on topics in real estate, technology, marketing and strategy. He is a prolific speaker at industry events, such as Inman Connect, T3 Summit, local, state and national association events. Somehow named to the Inman 100 Most Influential People list despite his best efforts not to be noticed, Rob understands that with great power comes great responsibility. Conversely, he notes that with very little power comes very little responsibility.

Bob Hale: Bob Hale has been president and CEO of the Houston Association of Realtors® since 1988 and has grown HAR to become the largest trade association in Houston and largest local Realtor® association in the country, with more than 41,000 residential and commercial members. Thanks to his vision and drive, HAR.com is the most frequently visited local website for real estate, with more than six million unique visitors each month. Bob has been named the Inman News Innovator of the Year, has been included on the Inman list of the most influential real estate people in the country every year since 2005, and has been ranked on the Swanepoel Power 200 every year it has been published, including ranking at No. 26 on this year’s list, which was the highest-ranking of any MLS executive. Bob was a RISMedia Newsmaker Hall of Fame inductee in 2020. He also has been included as one of the 25 Most Influential People in American Real Estate multiple times by NAR’s Realtor® magazine, which said, "Hale is widely regarded as a visionary and leader who puts his members' business needs first."

Dottie Herman: Dottie Herman is CEO of Douglas Elliman, one of the nation’s oldest and largest real estate brokerage firms, with approximately $27.4 billion in annual sales volume and 7,000 real estate agents. Dottie purchased Douglas Elliman in 2003 in partnership with Howard M. Lorber, chairman of Douglas Elliman, after having started as a broker with Merrill Lynch’s Long Island Division and then expanding Prudential Long Island Realty into a powerhouse brokerage on Long Islands and the Hamptons. Dottie has been consistently ranked in Crain's New York Business 50 Most Powerful Women in New York, Inman News Top 100 Most Influential Real Estate Leaders and The New York Observer's The Power 100. In 2015, she was inducted into the Long Island Business News Hall of Fame and listed in the Top 50 Women Entrepreneurs in America by Inc. Magazine among the Inc. 5000 list where Douglas Elliman was named as one of the fastest-growing private companies in America. In 2016, Dottie was named on Forbes 2016 and 2017 List of America’s Self-Made Women.

Keri McGhee: Keri McGhee is vice president of marketing at Tom Ferry International, the real estate industry’s leading coaching and training company. As part of the senior leadership team, she works with world-class real estate coaches, agents and marketers to deliver a trusted and unparalleled home buying and selling experience. Keri’s past experience includes being an early employee of Expedia, leading both consumer and corporate travel (Egencia) marketing initiatives. As a senior director at Zillow, she led the B2B marketing team responsible for strengthening partner loyalty and experience for 60,000+ real estate partners and inspiring action from 1,000+ employees.

Being a Crew member has its benefits – lots of them, in fact